After Beijing, we continue our travel to another two cities. First was Xian and the second one was Guilin. Both are very beautiful and part of the Big circle of sights if you going to China 😉 So let´s discover Xian!!! 🙂

Xian is a very friendly city. It doesn´t feel that much touristic as Beijing or Shanghai. But tourists are here as well. Honestly, I fell in love with this city!! Xian is one of the oldest cities in China – the old imperial city. That´s why we can find here many important and beautiful sights!! 🙂

The first sight we visited was the Giant Wild Goose Pagoda. This Pagoda is a part

of a complex of Buddhist monastery from the 7th century. The main role of it was a repository of valuable writings (sures) and statues of Buddha. This was followed by the Temple of the Eight Immortals. Temple is mainly dedicated to the legendary Eight Immortals: Han Zhongli, Zhang Guolao, Han Xiangzi, Tieguai Li, Cao Guojiu, Lü Dongbin, Lan Caihe and He Xiangu and it is the biggest Taoist Temple in Xian!! In the middle of the Temple is a bridge under which is a bell and who will hit this bell by the coin will have good luck (I think). By the end of the day, we went to Muslim Quarter of the city where is a big market with all different kinds of souvenirs. The most significant issue here is a bargain! And this is very difficult for me!!! But we somehow managed to bargain excellent price for some memories. 🙂 Then we walked around the Market which is not only a place to buy souvenirs but to taste the street food! And believe me, once you get used to all smells, you will love it!!! We tried so many things and then rolled towards the hotel and slept like babies ❤

After the breakfast, we went to the Fortifications of Xian. Believe me or not, but this one is the biggest in the World!!! It is 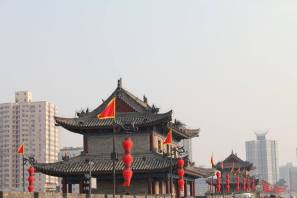 sed to be a complex of hot springs located in an area characterized by mild weather and scenic views at the northern foot of Mount Li, one of the three major peaks of the Qin Mountains. It is charming to walk around and enjoy the atmosphere! This was the end of our visit and we had last evening in Xian! 🙂 We walked around the centre and enjoyed the atmosphere!! I loved especially the Drum Tower which had beautiful lightning and around there were flying kites!!! ❤ it was SO BEAUTIFUL!! And!! Do not forget to go to food massage!! It is the best! ❤

Our journey continued to Guilin which is in southern China and is known for a fantastic landscape of limestone karst hills!! ❤ First place which we visited was Reed Flute Cave. You can think, sure cave, sounds boring… believe or not it is a beautiful place and furthermore, it is a place where is cold!! 😀 It is massive, you will walk for a bit and see many stalactites and stalagmites which can make you wonder how beautiful nature can be and with a little bit of our imagination we can see so many things!! As an example, I am adding a picture of Snowman. 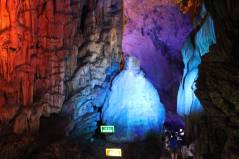 For some it is Snowman, but for others, it simply can be Buddha. 🙂 By the end, you will see a movie about the creation of the World which is projected on walls in the cave and with fantastic acoustics, you will be speechless!!! In a nearby park, you can admire a mountain in the shape of a camel or just have a walk around. It is a beautiful and quiet place (compare to those city centers and big cities).

As I said at the beginning, Guilin is known for amazing landscape, and this was also the reason why we were here!!! The best way is to make a boat trip along the river Li. The scenery is amazing!!! It is trip for half day or more than that. 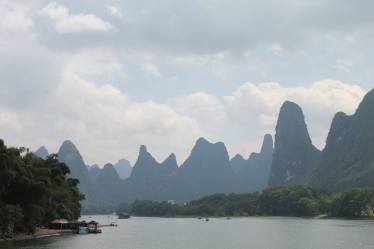 For this reason, you will get lunch and some refreshment. And we wouldn´t be Czechs if we haven´t ask for some kind of alcohol for the toast (of course). We got a bottle of something, we didn´t know exactly what, but it was nice and sweet! With this our trip to Guilin ended. 🙂 Gãnbéi!!

View all posts by mpalzero