The trip to Brazil was my very first trip on my own. I had nobody to come with me and I had to deal with every possible problem by myself. To make it clear, I did not go just for a trip without preparation. And what more, I had a friend living in Sao Paulo who I went visit. This was the best opportunity to feel the proper Brazilian lifestyle in a Brazilian family.

Because this was my first trip to Brasil, I have decided to visit Sao Paulo during the Carnival. This is the best time of the year so why not!! I was recommended to come at the end of the Carnival. I have arrived on 14th Feb. Romantic right?! I flew to Sao Paulo, where my friend was waiting for me.

First impression: OMG this is huge!!!

The time difference was not so bad and I was a just little bit tired. The excitement supposed to start the next day! 🙂 I got to know the city and suburb. The structure of Sao Paulo differs from cities I know. So much!! Basically, it is like small towns (neighborhoods) in one big city. It doesn´t have any city center. This makes it less complex and more interesting. Another thing I found interesting was historical culture of the city. Which was not very rich for old buildings, on contrary… City is quite modern! Of course, there are couple old houses, but not many, because they will have to pay some kind of tax, so it is better to tore them down and build new and modern one. I remember my friend showing me a building from 60s, saying this is old building. Sao Paulo is full of great architecture, just walk down the Avenue Paulista. Very modern part! Sao Paulo is also diverse city when it comes to nationalities. You will find Italian (Bella Vista), Chinese and Japanese (Liberdade). So many posibilities and places to discover!!

Like in any othere cities there are neighborhoods where it is not safe to walk alone during night. I want to say do not be afraid, but be careful! Do not provocate or go dangerous places. You never know… You always need to be careful!!

The Carnival is not just the parade as we know it. I have experienced two different faces of brasilian Carnival. The first one was a street carnival, there was music to dance, drinks and people were dressed up in costumes. It was more chilled and very friendly!!! For this experience my friends took me to Vila Madalena. And from the moment I came out from the subway, I knew that I will never forget this!!

The atmosphere was amazing and even though, it was raining for a while, it didn´t stop people to have fun. People just found a shelter and after it stopped street was full again. The atmosphere was very chilled and friendly! Very friendly!

Maybe one fact about Brazilians. Well, I don´t want to say that they are crazy people, but they are, as any other Latin nation, are passionate and I LOVE that! This is a little bit increased during the Carnival. So, it is absolutely normal, that a guy will approach you and kiss you without any words. And yes, this is personal experience hahaha. 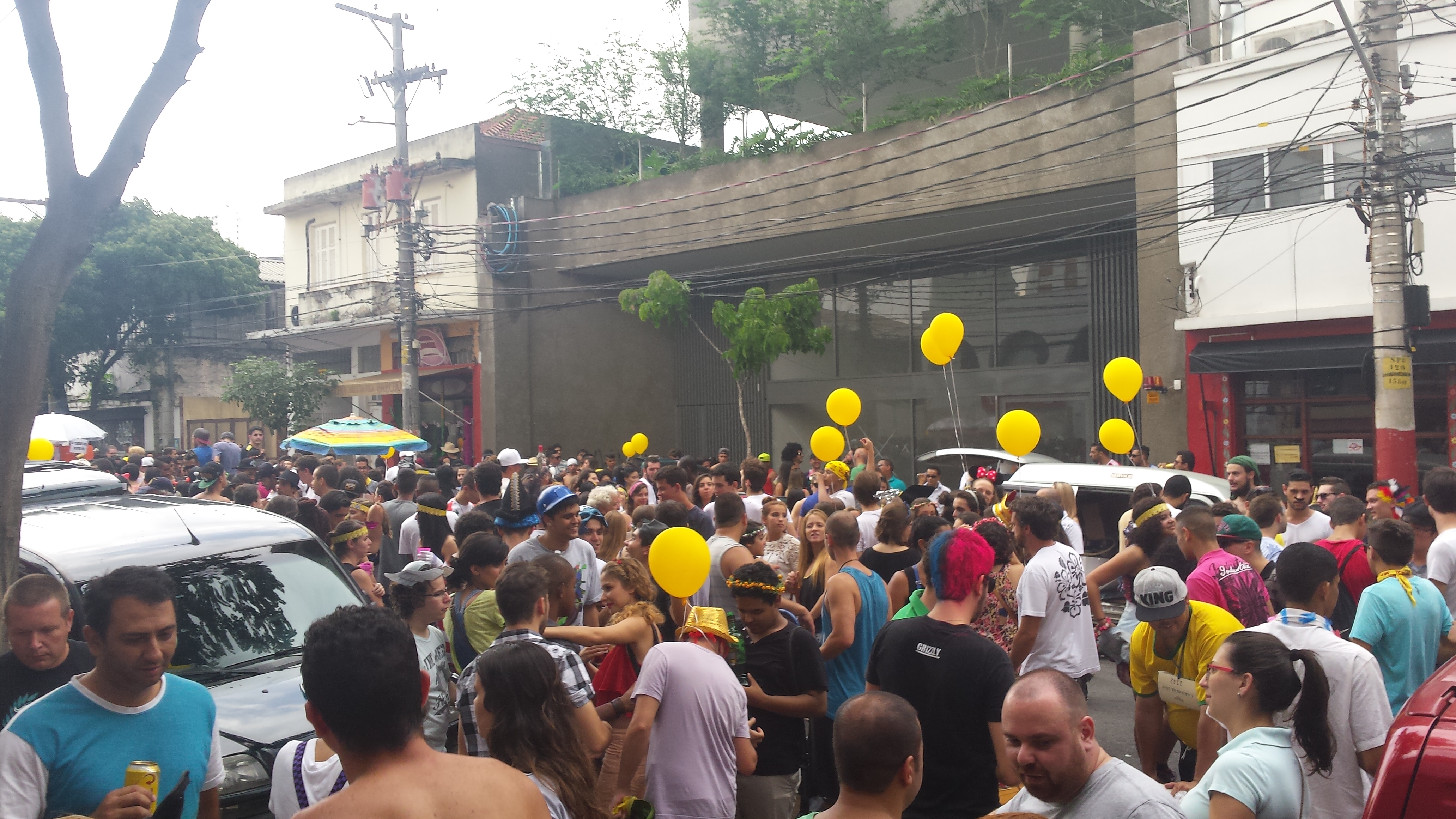 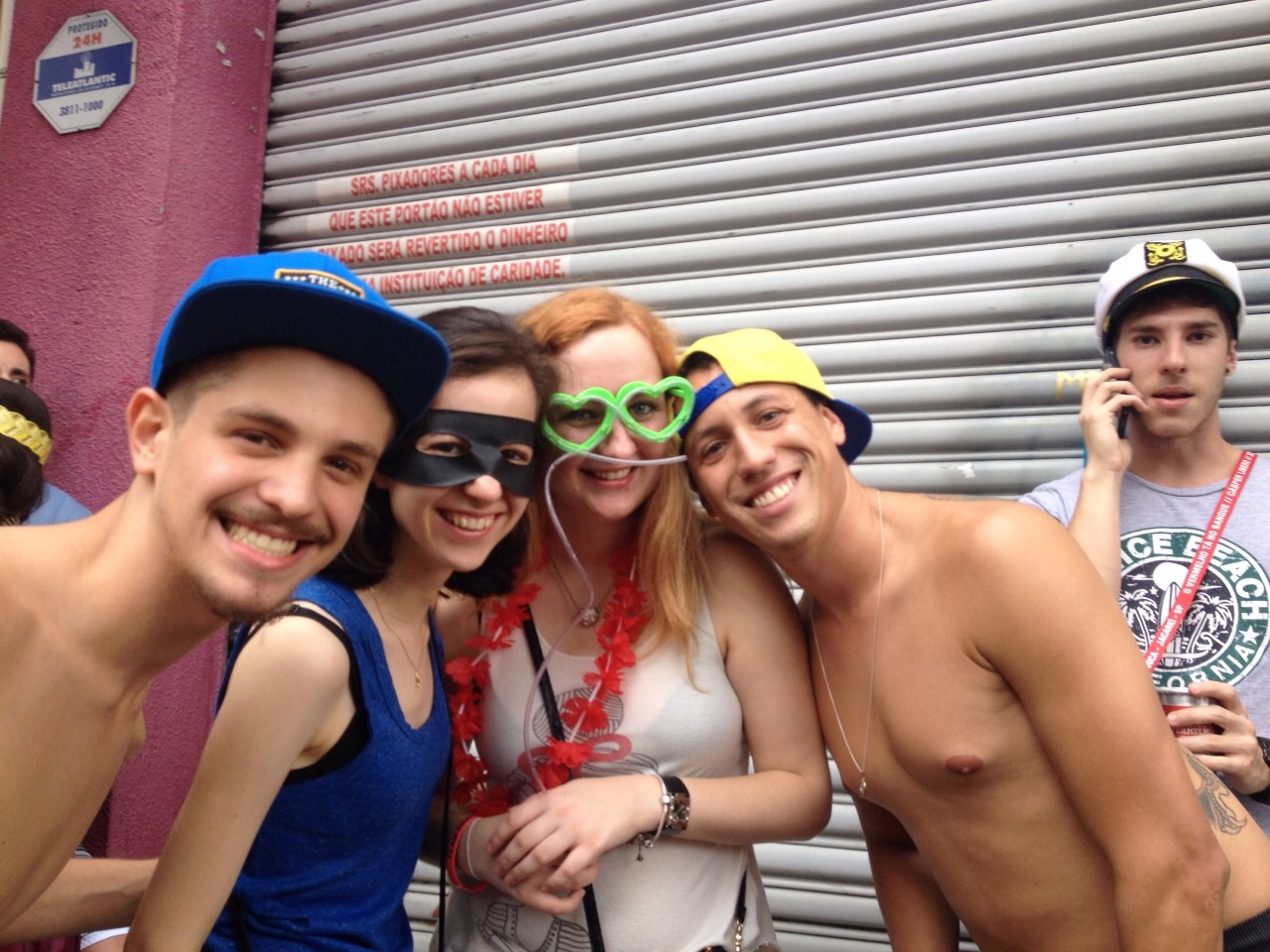 And the second Carnival is the fancy one – with all those amazing parades. Samba schools are competing in the Sambadrome and the result will then affect their reputation upcoming year. Samba schools are usually structured as a guild than a school and usually are associated with a neighborhood. These schools usually practice all the year for this main event. There are several requirements that need to be done: the structure of the group, the song, the theme, everything is carefully chosen and decided.

The first group is always a group which introduces the theme. The second judging group is called the allegorical floats. This is supposed to represent the elements of the plot of the theme as well as the symbol of the school. The school has to work and cooperate with one body. All members have to move/dance in the rhythm and in good timing. They got penalized if the parade speed is slower or quicker. The flag of the school is introduced by mestre-sala and porta-Bandeira. An important part of the group is the drumming section which leads the pace of the parade. Other members: the queen or the Rainha de Bateria, the singer, ala das baianas (ladies that represent old aunts of the first section) and old-guard. This description is very brief I hope it is correct since I do not remember every single detail…

So, each of the Samba school has its theme for the performance. This could be f example: Alice in Wonderland, Olympic Games etc. Its performances are always very interesting and the parades are amazing. 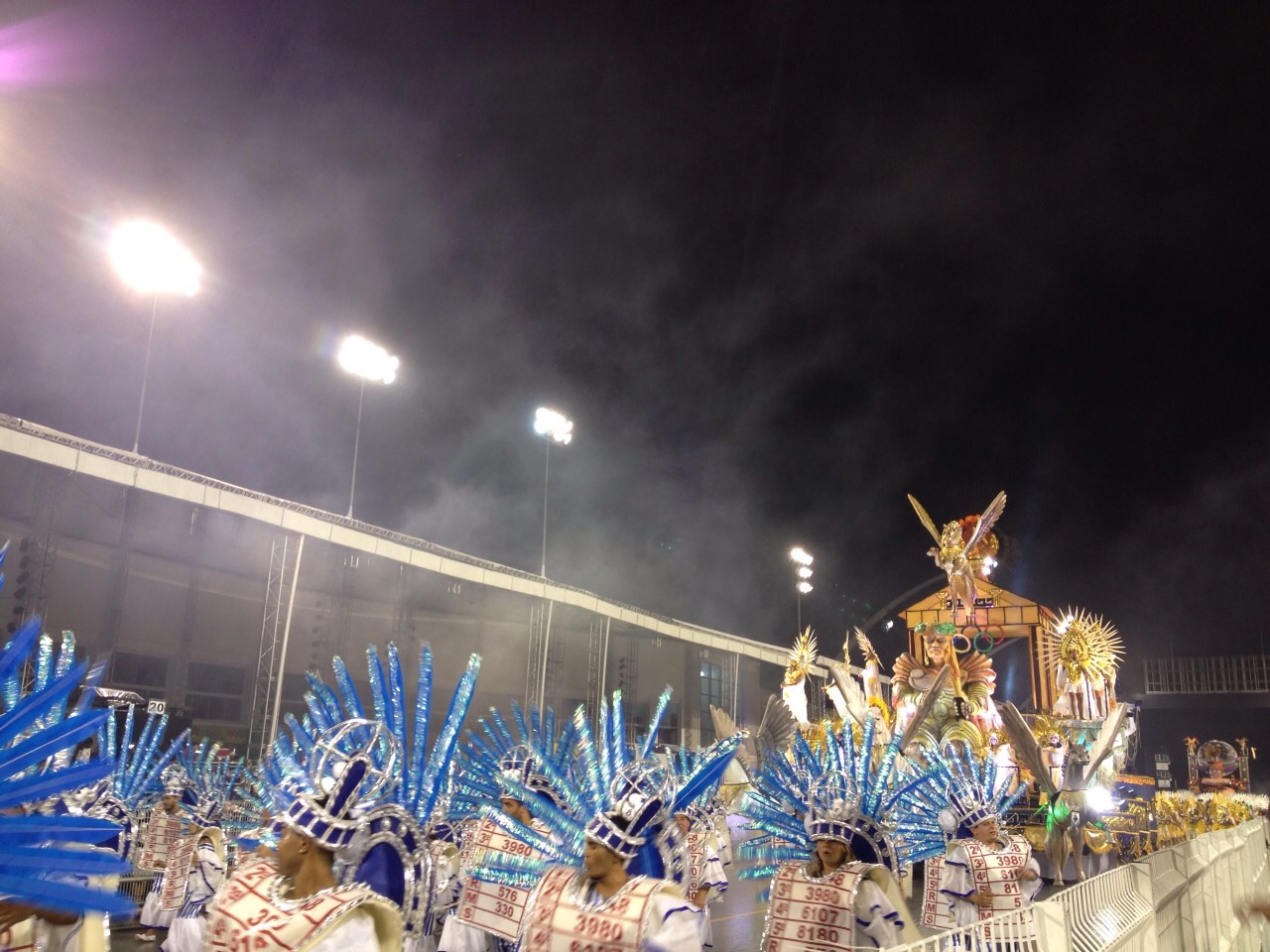 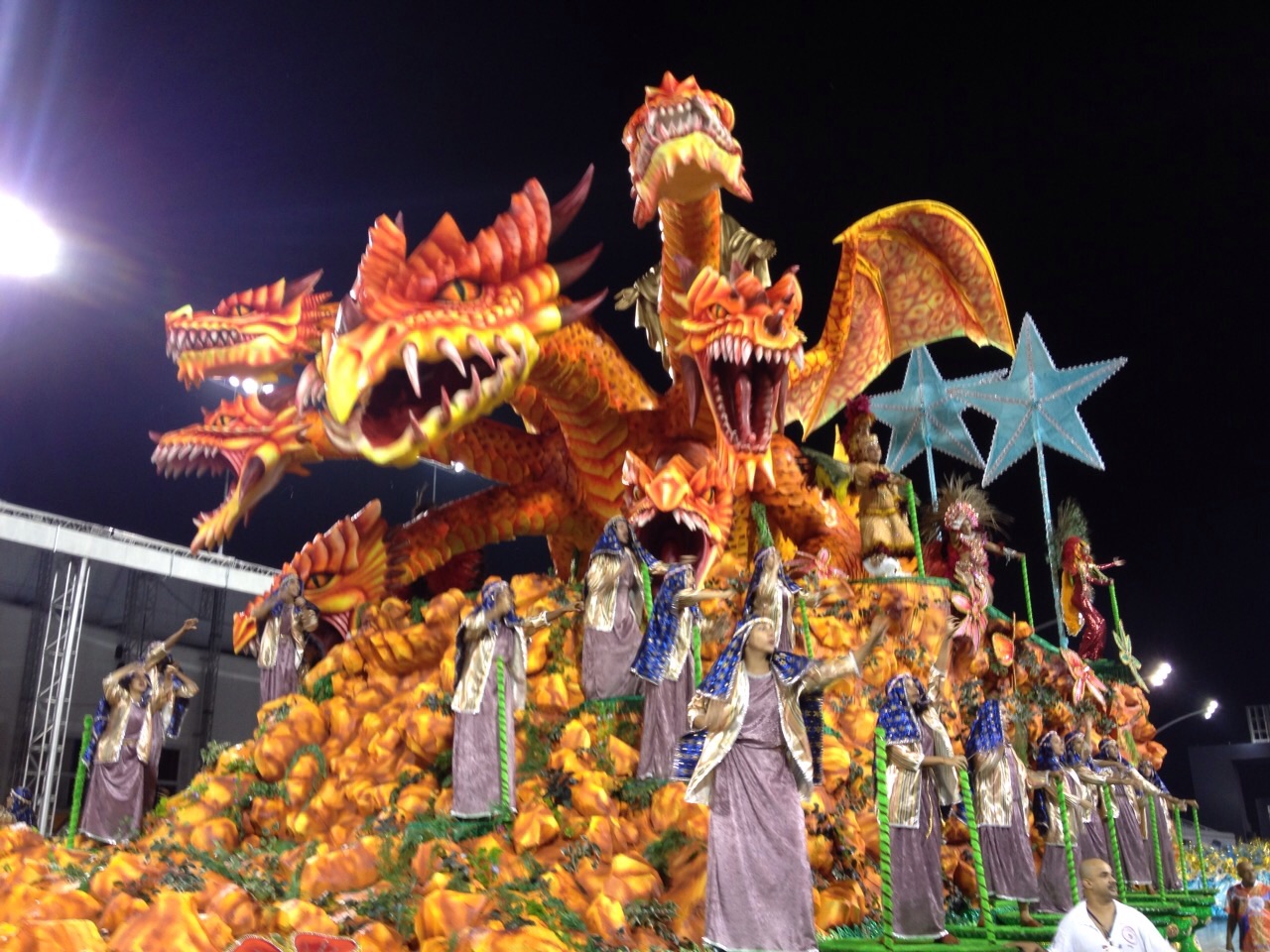 I and my friend took a flight down so I had an opportunity to see Sao Paulo from the top. I would describe it as a “lego city” In its own way very beautiful and interesting composition. And from above it is also smaller.

Once you are in Brazil, you should see more than just one city. Especially one like Sao Paulo city. That´s why next destination was Iguacu Falls. This was definitely worth it!! Iguacu Falls are one of the most amazing places in the World. We can say one of the World´s wonders! As part of the UNESCO World Heritage falls are just amazing, breathtaking, incredible… Iguacu Falls are the largest waterfalls system in the World and are situated on the border of the Argentina and Brasil. Hard to say which part is more beautiful 🙂

Just for comparison to imagine:

There is a trail along the river Iguacu and Paraná, there you can see lots of amazing falls and nature beauties.  You need to buy a ticket first. They have student discounts and group discounts but every penny worth to see this amazing nature complex.

The trail will take you to the biggest one in this complex called The Devils’ Throat (Garganta do Diabo). During the walk you can se numbers of cascades which then can create beautiful rainbows. But be careful! There are also lots of monkeys which are hungry and annoying. So I would recommend nothing to get their attention. I had a plastic bag and they were very interested what I have inside and at least four approaches me and almost jump at me :)) little scary… 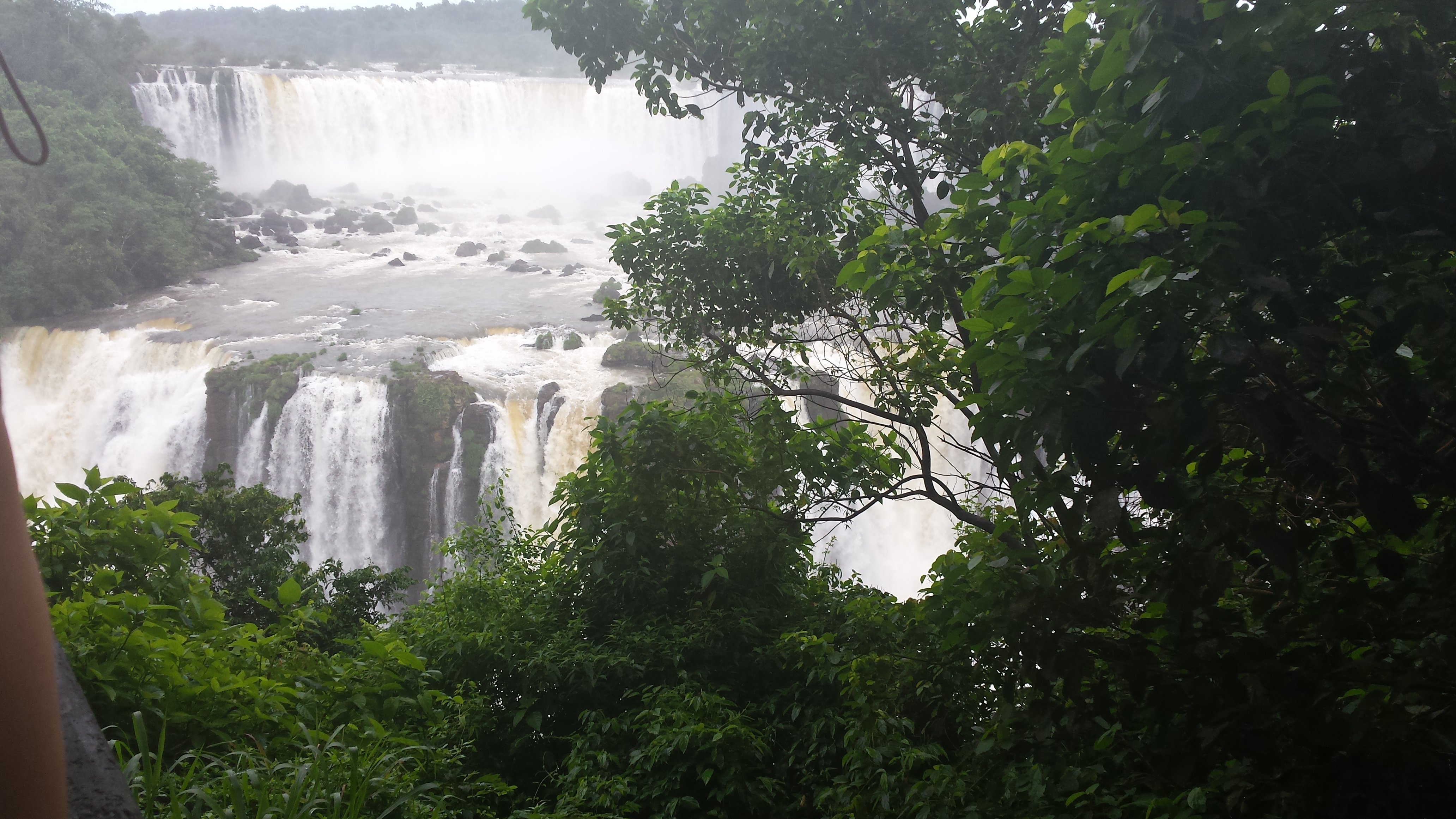 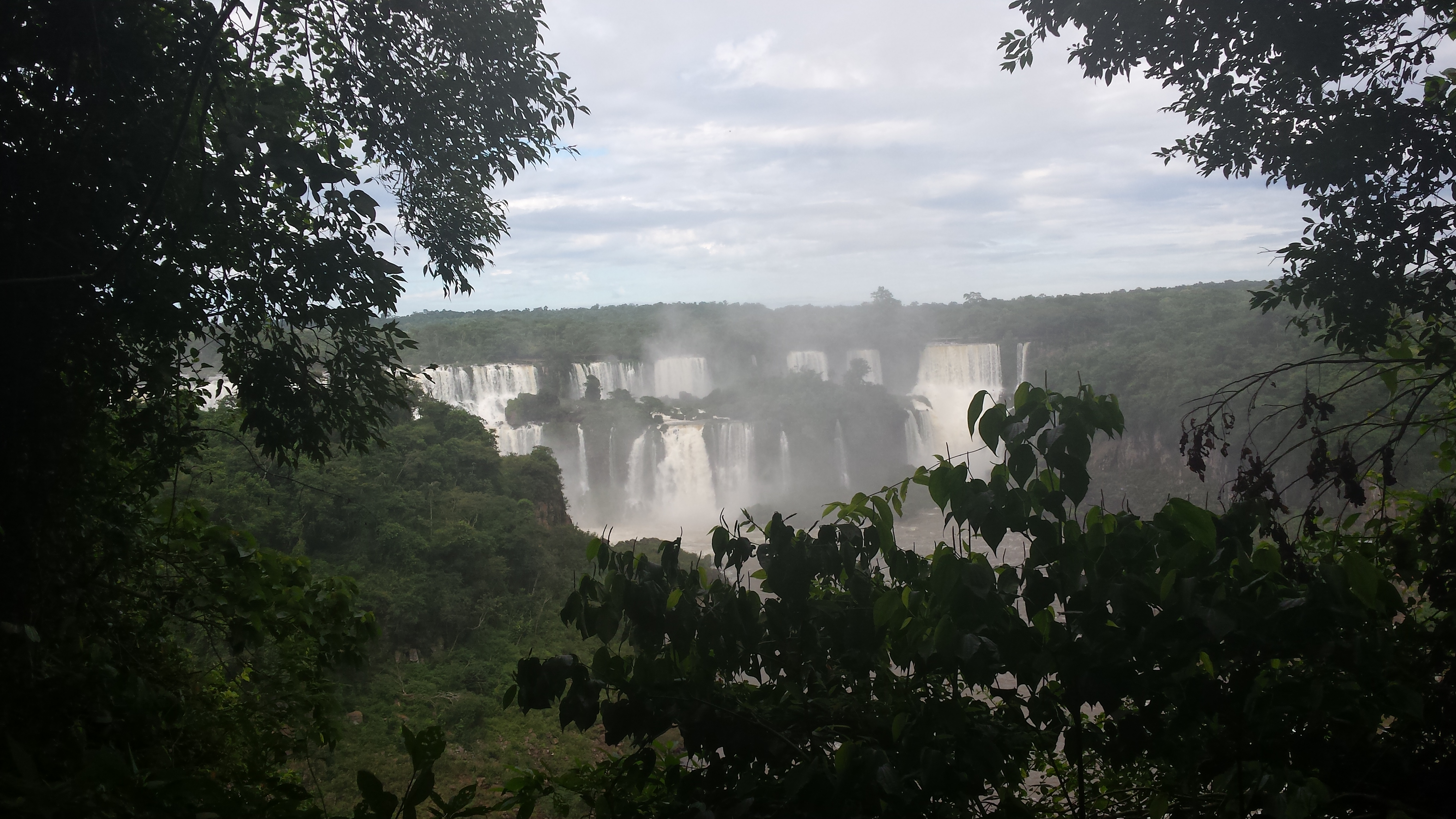 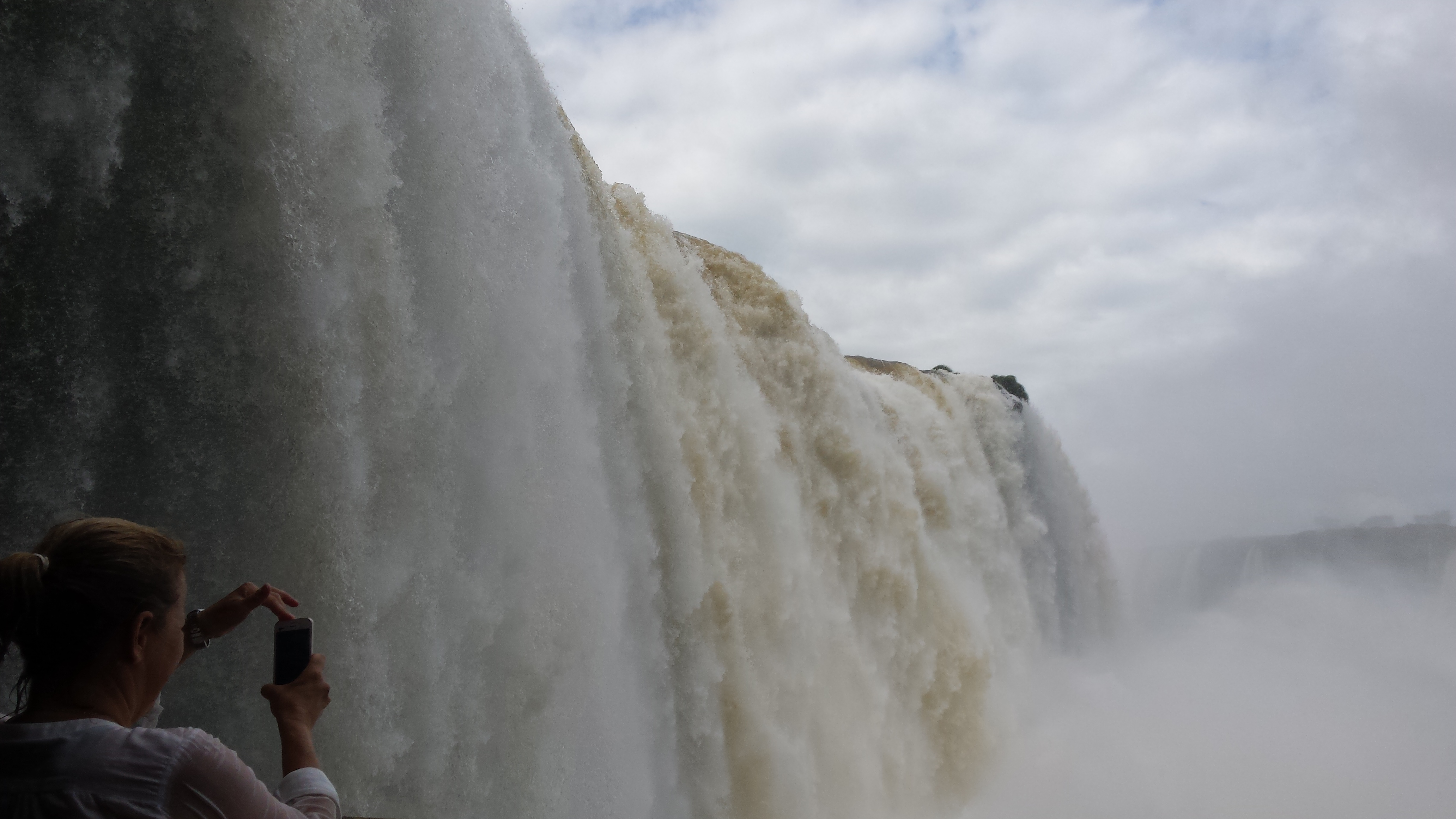 View all posts by mpalzero